It’s NOT a rumour: 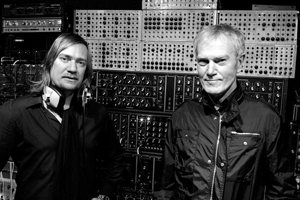 JOHN FOXX has been a presence on the UK electronic music scene for many years and was the original vocalist for Ultravox before leaving to pursue a solo music career (during which Midge Ure joined Ultravox).

Foxx’s solo career post-Ultravox is most notable for the single Underpass which reached No. 31 in the UK charts and has become a classic of the early UK synthpop scene. Foxx’s album Metamatic has likewise been established as one of the most prominent electronic music albums of its time.

John Foxx & The Maths came about as a collaboration between Foxx and producer and musician Benge. The album Interplay arrived in March 2011 which was described by The Quiteus as “one of the finest electronic records you’ll hear in 2011.” Their third album release Evidence features collaborations with The Soft Moon, Gazelle Twin, Xeno & Oaklander and Tara Busch and also includes a cover version of Pink Floyd’s Have A Cigar. Evidence will be released by Metamatic Records on 25th February.

There’s another OMD angle here as John Foxx & The Maths has worked alongside HANNAH PEEL who is perhaps best known for her unique musicbox cover version of OMD’s Electricity as featured on her debut EP Re-Box released in 2010. Our sister site interviewed Hannah in 2011.

UNCUT REVIEW OF THE SHAPE OF THINGS

Before finding success with vocalist Midge Ure, Ultravox were led by the Chorley-born John Foxx, whose pale, alien appearance and passion for synthesisers proved a little exotic for a general public still absorbing the shock of punk. The zeitgeist, of course, caught up with Foxx although he still remains on the fringes. Unfairly, perhaps. The Shape Of Things, a collaboration with London synth collector Benge, couches his dolorous laments amid a retrofuturist show of bubbling electronics. It works well enough that when ‘Falling Away’ pastes on some broiling guitar feedback it sounds almost superfluous.’

I received my “golden ticket” to Tunited last night!
Five minutes later, I had my account up and running..

It’s like Electromancer, Bandcamp and all the rest, rolled into one. Free software for god’s sake!
And it’s owned and run by MIDGE URE!!

Unfortunately, Tunited is still in the “closed-beta” phase, so it’s not open to the public yet, but if any of you musos out there has received their invitations, then look me up!