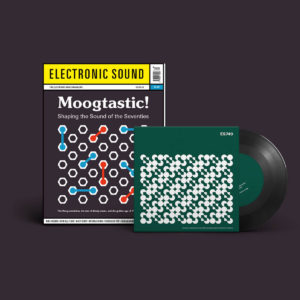 In our Moogtastic new issue we take a look at how Dr Bob’s famous early machines defined the sound of the 1970s. The tale of how Moog took hold in the States has been well told on our pages via the adventures of Paul Beaver and Bernie Krause, less known is the story of the British invasion. In our cover feature, we meet Mike Vickers, formerly of Manfred Mann, the proud owner of one of the first Moog IIIC’s to arrive on UK shores. Vickers was hired by The Beatles to help with the making of ‘Abbey Road’ following which the synth genie was well and truly out of the bottle.

Elsewhere in our cover feature, we examine the influence of Moog and chart the under-the-radar connections that shaped the sound world of an entire generation. We take a trip from those first Moog adventures with Mike Vickers as our guide, we talk to KPM composers Alan Hawkshaw and Brian Bennett about the heyday of library music and discuss the lasting legacy of their work with Matt Berry who celebrates the classic TV theme tune.

Elsewhere, we meet Sheffield’s rather excellent International Teachers Of Pop, who does what their name promises, we tell the unheard story of Scottish synthpop almost-rans Secession and catch up with the trailblazing Ultramarine as they prepare to release an excellent new album.

More? You’ll find Stephen Mallinder telling us the tale behind Cabaret Voltaire’s epic ‘Nag Nag Nag’, Hacienda legend Graeme Park talks us through some of his favourite things in Under The Influence and we relive the birth of Pan Sonic in a Brixton backstreet club in the early 1990s in Time Machine.

We start the year as we mean to go on by packing our Back section with reviews of the essential releases coming your way this month and filling up our Front section with all manner of synths, hi-fi, books, toys, gadgets and events that’ll have you wondering how we do it. How do we do it? That would be telling.

Taken from 1972’s ‘A Moog For All Reasons’ album recorded for the KPM music library, our limited edition seven-inch single features two tracks by Mike Vickers. Formerly of Manfred Mann, Vickers was transfixed by the idea of Robert Moog’s magical machines and, without even having been near one, ordered a monstrously pricey IIIc modular, figured out what it could do and quickly became the go-to producer for your more adventurous artistes, working with The Beatles on ‘Abbey Road’.

“I did a lot of library music,” says Vickers, “but I became someone who went out for hire with the Moog. The next thing I knew I was in some studio or other, with someone wanting it to sound like strings or a French horn, which wasn’t the way I wanted to think, I just wanted to play around with it.”

And play around he most certainly did. On the two extraordinary KPM tracks featured on our seven-inch, Vickers really was able to let his imagination run riot with the Moog. Example? The lead track on our seven-inch is ‘The Adding Machine’, an intense five minute Moog workout.

“I remember that,” says Vickers. “It was just one note and I gradually add more and more until it’s a huge jumble at the end. I was quite impressed with that one!”

Electronic Sound Magazine have just announced that issue 48 (47 is released next week – See below) will include a re-issue of John Foxx‘s classic “Underpass” – on red vinyl!

Here’s the actual teaser from the e-mail:

A quick heads up about Issue 48 (our last issue of 2018) while we’re here. We are very excited to announce that this magazine and music bundle will feature a limited edition reissue of John Foxx‘s ‘Underpass’ seven-inch on Christmas red vinyl. We are expecting an extremely high demand for this, so the only way to ensure you’ll get a copy is to sign up to the Bundle Subscription. We’ve got loads of other fantastic goodies in the pipeline for 2019 too, so sign up now and you won’t miss out!

This will sell out before it even starts, so the only way to guarantee a copy is to subscribe NOW.

(I’ve already done it – I’m not fussed about issue 47 (Clockwork Orange), but NO WAY am I missing out on this..

There’s a discount as well, you get issue 47 for a fiver instead of the usual tenner, so it’s worth it..

Remember, you heard it here first..

If they don’t make the target, the whole deal is off?
With just over 24 hours remaining for our Crowdcube campaign, I wanted to send out a quick reminder of all our Crowdcube rewards: Could you top up and receive a better reward? Could you share our rewards with your peers? Is there a reward you’d like to see that just isn’t here?

Electronically yours,
Chris and the team at Electronic Sound.

This message was sent from my phone. Please excuse the brevity and any typos. Thanks