You couldn’t make this stuff up, could you?
Sweet manufacturer Chupa Chups are giving away REAL gems hidden in their lollipop wrappers..
Don’t believe me? have a look at the official press release, below..

Milan, April Ist, 2014 – The next time you open up a Chupa Chups lollipop, it could well be an emerald, sapphire or ruby stone worth hundreds of thousands of dollars.

Chupa Chups, the world’s most loved lollipop announced today that it has released a series of extremely limited edition, 50-carat precious stone lollipops into its worldwide distribution.

The limited edition lollipops  – made of entirely of emerald, ruby, sapphire, diamond and giant black pearl – all shaped and priced as an original Chupa Chups – have been distributed randomly across the world as part of a marketing campaign to surprise and delight customers everywhere.

Chupa Chups has released a total of 1 of each of these gemstone lollipops into their worldwide distribution.

Chupa Chups Chief Marketing Officer, Marco DiPaulo confirmed that the campaign began a month ago, and has already created overwhelming excitement in Argentina where the first gemstone lollipop has been discovered.

“You may ask why Chupa Chups has decided to do this. Well, just imagine if the next person who happens to be lucky enough to uncover a precious gem stone is you,” Mr. DiPaulo said.

The campaign is expected to run for as long as until all precious gemstone lollipops are uncovered.

There, it’s official! Here’s what to look out for: 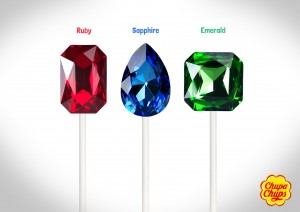 Seriously, they are giving away Rubies, Sapphires and Emeralds. (no diamonds, though – cheapskates.. 🙁 )

Right – I’m off to the local 24hr supermarket. You never know.

What do YOU think? Is this for real?
Leave a comment below..